Right On Track: HS2 Updated Nationwide Rail Project To Improve Travel To And From Manchester

Transport secretary Grant Shapps announces updates to Britain’s major nationwide rail project, including the future of HS2 and plans to upgrade existing rail networks in Manchester and across the country.

In November the Government announced its proposals to improve connectivity across Britain by reinvigorating the rail network. The Integrated Rail Plan confirmed the policy to deliver the western leg of HS2, the country’s high speed rail network. Once complete HS2 will provide a network of high- speed lines that will connect London, the Midlands, the North and Scotland. Alongside the development of HS2, the Plan also outlines policy that promotes major enhancements to existing lines that will further enhance links between communities across the Midlands and the North by reducing journey times and adding to track and station capacity.

On behalf of the government Grant Shapps highlighted that “Just as the Victorians gave this country our railways nearly 200 years ago, this Integrated Rail Plan will create a modern, expanded railway fit for today and future generations. Significant improvements will be delivered rapidly, bringing communities closer together, creating jobs and making places more attractive to business, and in doing so, rebalancing opportunity across the country.”

The western leg of HS2 will be constructed in two phases: Phase 2a is the section between the West Midlands and Crewe, and Phase 2b which extends the high speed track from Crewe to Manchester, with connections onto the West Coast Main Line.

This new track will connect new stations in London, Birmingham, Leeds, and Manchester that would be served by high speed trains running at speeds of up to 360 kilometres per hour (kph) (225 miles per hour (mph)). Trains will also run on the existing conventional rail network allowing HS2 to serve destinations including Crewe, Preston, Liverpool, Glasgow and Edinburgh.

Those living in Manchester will be major beneficiaries of HS2 as the home to two new stations, one adjacent to Manchester Piccadilly Station the other close to Manchester Airport. Users of HS2 services will experience significant improvements in journey times with services between central Manchester and London expected to reduce from 2 hours 10 minutes to 1 hour 7 minutes whilst the journey time between Manchester and Birmingham will reduce from 1 hour 28 minutes to 40 minutes. As well as faster and more efficient journeys these trains will also offer a greater passenger capacity. 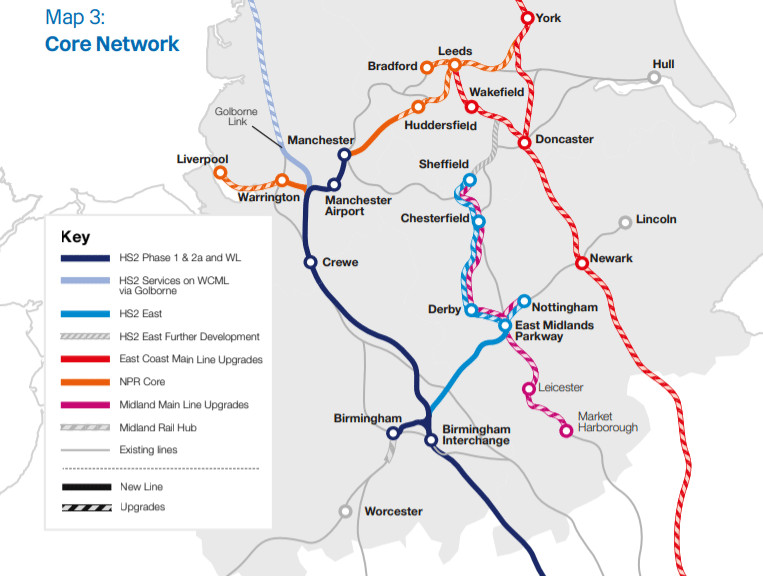 Other proposals in The Integrated Rail Plan outline enhance existing rail travel between cities and towns in the North of England. With £625 million of funding confirmed, a series of works has been proposed to upgrade the existing rail infrastructure on the Transpennine Route between Manchester, Leeds and York. This project, known as the Northern Powerhouse Rail programme, will include electrification of the line, new signalling and the development of new sections alongside existing track. This will allow fast trains to overtake stopping services, increasing through passenger services by 20%.

More broadly, with more efficient means of transporting people, the Integrated Rail Plan will generate important economic regeneration across the Midlands and the North. In Manchester, the extension of the high speed rail network will help to realise, in part, the Northern Powerhouse project. The Plan endorses the view that enhanced capacity and good connectivity strengthen the links between businesses, workers and customers and lessen geographical barriers to markets, skills and knowledge. As a result, these changes will help the city of Manchester, and other Northern areas, boost their local economies and reach their huge untapped potential.